No other sport connects people around the globe the way football does. Propelled by the outstanding achievements of the German national team in the last couple of years, German football seems to enjoy widespread sympathy these days contributing to a rejuvenation of the Bundesliga after years of stagnation. The renewed interest manifests itself in surging numbers of spectators pushing domestic stadiums to max out their capacities. In order to keep up with the demand, the SV Werder Bremen decided to expand its facilities and turn its stadium into a pure football arena by removing the circumvening running track. The new facility will be shielded with a futuristic glass front and equipped with some 200.000 solar cells on top of its new roof.

As part of this remodeling effort, the East and West tribunes are supposed to be straithened and pulled closer to the pitch in order to provide a more intimate experience to visitors. The existing tribunes as well as large parts of the roof structure had to be removed and rebuilt under new measurement designs, which necessitated an entirely new load distribution. Additional block and strip foundation plates as well as a number of temporary struts had to be erected, all of which required deep foundations. Despite our natural inclination toward the northern rival Hamburger SV, we thankfully accepted the task to execute these deep foundations.

Our first part was to produce 86 Gewi- micro piles for 9 temporary struts along the West tribune designed to shoulder the new roof structure. The columns had been placed outside of the stadium, a circumstance which allowed us to perform our works during the hot phase of the Bundesliga in March and April of 2009 without interfering with the game schedule. The load transmission follows along the tilted struts and through our similarly inclined micro piles into the load bearing soil layers. During season break in the summer we continued to produce a total of 189 Gewi- micro piles, some of which were designed to resist shifting and dynamic loads caused by visitors, for the West tribune from the inside of the stadium. In order to avoid any impact on neighboring foundations and on other building structures, we chose a low-impact drilling technique. The presence of a soft silt layer typical to this area, known as “Lauenburger Silt”, compelled us to keep our mini piles within the load bearing upper sand layer. Thanks to great coordination efforts from our client, we were able to work smoothly with one drill- and grout unit despite very limited maneuverability on the work platform.

After finishing up the West stands in summer of 2009, the project was continued with similar reconstruction measures of the East tribune during season break in the following summer. Only this time around, we had to abide by an even tighter time schedule, which forced us to work at our productive capacity with up to three drill- and grout units – partially in double shifts – in very confined working conditions (see Image 1). In sum, we produced 461 micro piles with a total steel length of 6.500 m in only 17 days right on schedule. Meanwhile, demolitions works on existing tribunes as well as piling works with large diameters were being carried out in such close proximity to our machines that it took excellent planning and daily coordination on behalf of our client to pull this endeavor off without delay. Singular foundation slabs underneath the stands could only be reached and penetrated with one of our mini drill rigs. Image 2 depicts a block foundation with our fully mounted Gewi- pile heads sticking out. 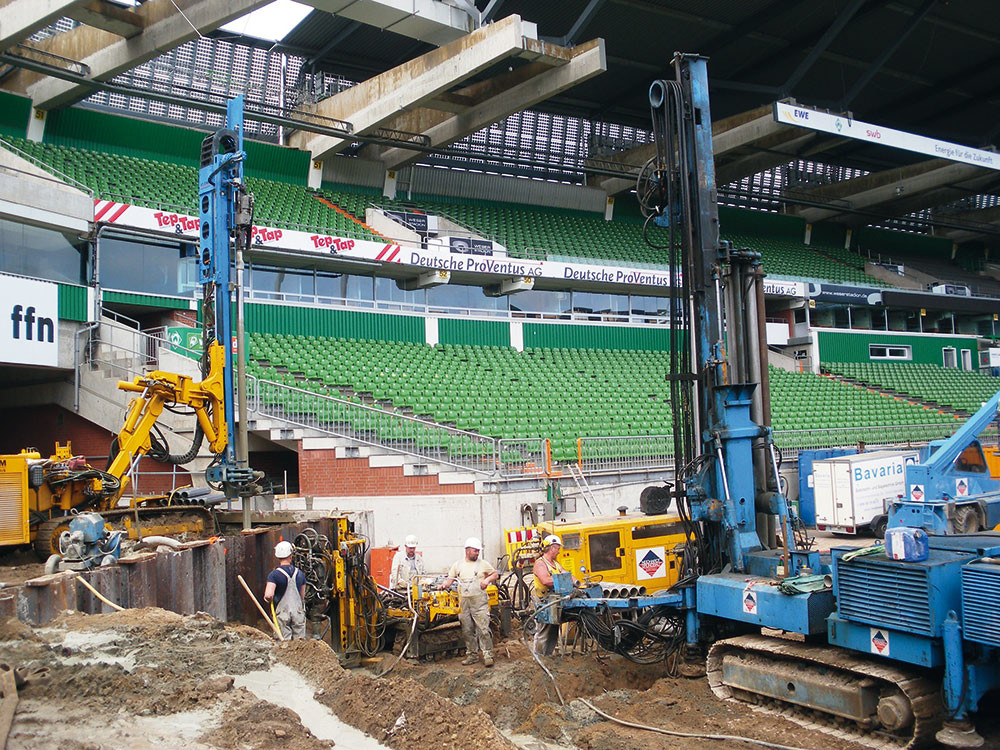 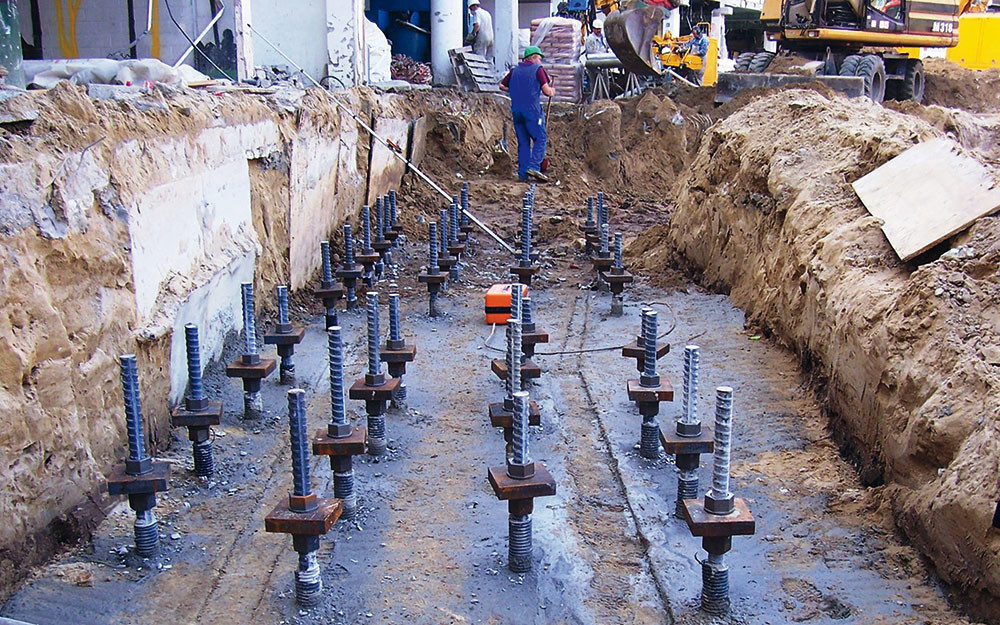